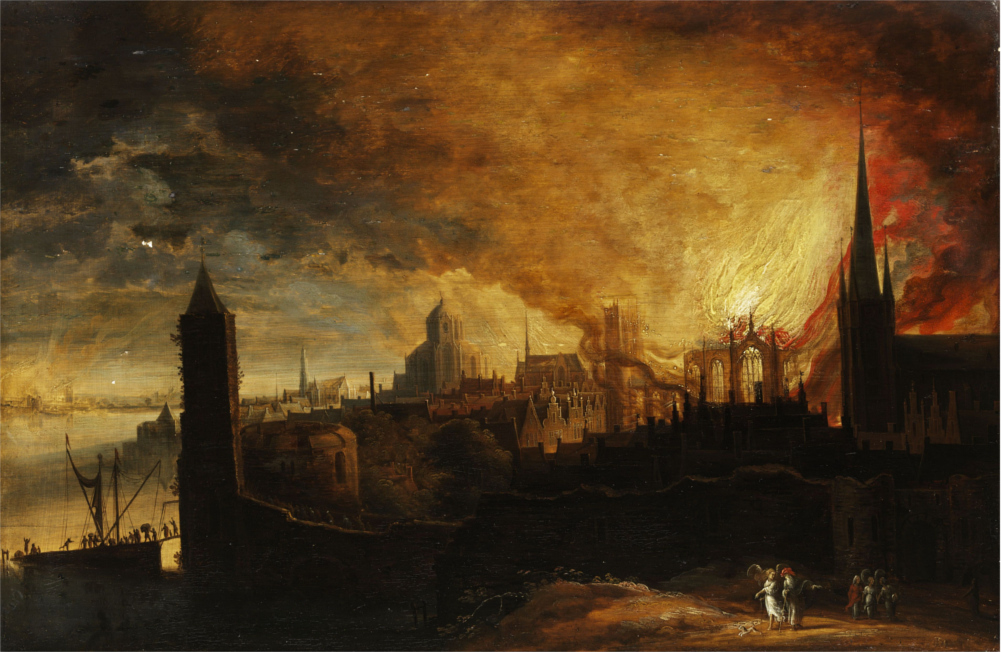 Investigative horror games tend to rely more heavily on written scenarios than fantasy hack-and-slash games. There is a substantial amount detail needed to run normal investigative games including clues, foreshadowing, and red herrings. So it should come as no surprise that occasionally GM’s will make a mistake. This is a brief account of one such mistake that I made in a game, and why I chose to burn down a city to fix it.

I was running the campaign The Sense of the Sleight-of-Hand Man for my group. The players made it to the Dreamlands city of Lhosk on the southern shores of the Cerenarian Sea. My mistake was allowing the players to sell a captured Black Ship owned by the Men of Leng for about 200,000 gold pieces. At the time I had no reservations since the cost of the vessel is listed in the game material. But after the players had bought a castle, servants, horses, and a small hired army, I realized that the situation needed to be fixed.

My co-keeper and I had pondered previously if there was a commodities exchange happening within fantasy cities that adventurers were unaware of. So with that idea in mind, I chose to deflate the value of gold in Lhosk and crash the market. With gold devalued, the people of Lhosk were paying grossly inflated prices for common goods, e.g. a thousand percent markup for a rotten apple. And unbeknownst to the PCs, imports had virtually stopped due to the newly increased import tax at the docks, and goods in warehouses were going bad because most merchants could not afford the wholesale prices.

After several weeks of this, the city was in chaos. The typically sedate Dreamlands natives were in an uproar; riots were happening in the city’s market district, and as people started dying, and disease began to spread, the lower classes staged a full uprising. The Men of Leng, who were none too happy about one of their own ships being stolen and sold to the highest bidder, naturally decided to return to the city and take what was theirs.

A fierce standoff between proletariat forces, middle-class merchants and knights, and the Men of Leng began. And to set off this powder keg we just needed a spark. That spark was a PC by the name of Colonel Grant Beauregard. In a previous session, riding high on his recent increase in status to the super wealthy, the Colonel had kitted himself out in the best arms and armor he could afford and purchased some Potions of Rage from a merchant. And being a veteran of both the Spanish-American War and the Great War, he saw the Lengians as an invading force. So the boisterous Colonel did what came naturally and drank his Potion of Rage and planned to charge into battle against the Lengians.

The Colonel, now blinded by rage, began attacking the commoners around him. He killed several rather quickly, but waves of angry protesters and knee-high goatmen overpowered him and he was lost amongst the mob. And thus started the Battle of Lhosk, which rather quickly turned into the Burning of Lhosk. Five days later, the entire city was in ashes, the population depleted, the market was stabilised albeit almost nonexistent, and the players, rightly seen as the harbingers of this calamity, were robbed and wanted men.

None of the Burning of Lhosk was in the book. It was simply the solution that I devised with my co-keeper to restore balance to the game and set them on edge. Sure, I burned a city to the ground, killed thousands of NPCs, and murdered a player character in the process, but this tangent from the main campaign provided some of the most memorable sessions our group has ever had. By the way, Colonel Beauregard did make one more appearance. His fragmentary corpse had been crucified in front of the Black Temple as a warning to those willing to bring trouble into Lhosk, and perhaps as a warning to my players.

WeirdWorks is a horror game creators’ group. It’s intended to serve as a resource and support system to encourage horror and weird game writing, editing, artwork and brainstorming. It’s like an incubator. For weird things.